Fr. Jim Pappas began his studies at the Holy Cross School of Theology in Brookline, MA in 1980.  After graduating with a Master of Divinity Degree he was appointed Pastoral Assistant at the St. Paul Greek Orthodox Church in Irvine, CA.  There he assisted Fr. George Stephanides in the conduct of Divine Liturgy, and youth and young adult ministry.  Fr. Jim was Ordained at St. Sophia Cathedral in Los Angeles and served the church for 5 years as the assistant to Fr. James Adams.  He was assigned the Presbyter at the parish of St. George Greek Orthodox church in Fresno, CA in 1992.  He and Presvytera Donna found a home, and settled in Fresno.  While assuming the Spiritual Leadership of the Greek Community of Fresno, he easily conducted all of those important functions expected of a Priest.  He came and took the helm and has led the Church with the Spiritual support of a loving Community for over 25 years.

Fr. Jim and Presvytera Donna enjoy a family of 3 children, Constantine, Chrysanthe and Evangelia.  Their life has been dedicated to Sunday school, Church Choir, Senior Groups, Youth Groups, Clergy Laity Conferences, Church General Assemblies, Prison Ministry and marriage and family work with the Wellness ministry of the Metropolis of San Francisco.  In his years at St. George, the nearly historic Greek Food Festival has grown from a mere gathering to a massive 3-day Greek Festival attended by 20 to 25 thousand people.  During his time at St. George he has overseen the completion of the church ceiling with magnificent iconography consistent with that which was created 50 years before.  It his personal blessing to minister to the community of St. George Greek Orthodox church in Fresno, CA. 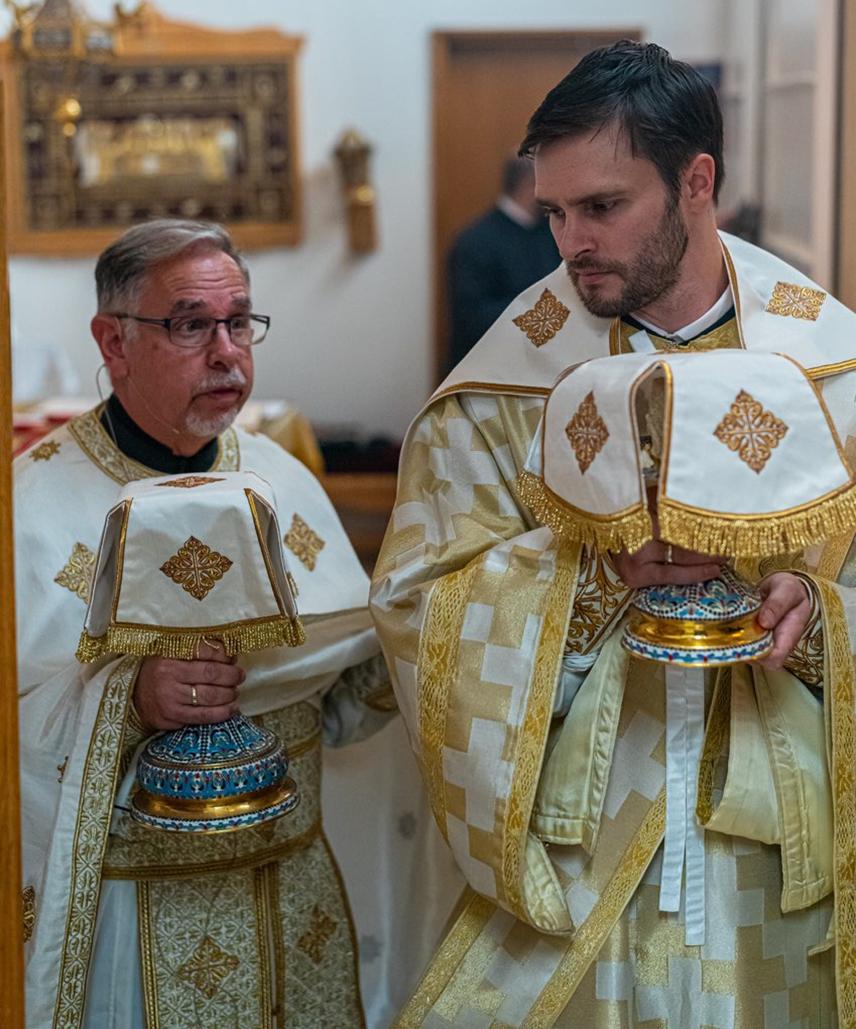 Fr. Christian began his seminarian studies in 2009 at Hellenic College Holy Cross in Boston Massachusetts. Here he would earn a degree in Religious Studies in 2012 followed by his Mastersof Divinity in 2014. Following the completion of his seminary education, Fr. Christian moved to Fresno California where on the Feast of the Elevation of the Holy Cross he began his lay ministry as the pastoral assistant and youth director at Saint George Greek Orthodox Church under the direction of Fr. Jim Pappas. This has been a very humbling experience for Fr. Christian and he could not have asked for a better model of the priesthood and mentor to guide him through these first years of ministry.

Fr. Christian’s time at Saint George has been filled with innumerable blessings including meeting his beloved wife, Presbytera Maria. Though their paths had crossed several times over the preceding years, it was not until Fr. Christian was established in Fresno that they had the opportunity and joy of getting to know each other. Their friendship grew quickly and, by Gods’ Grace, they were joined in the Sacrament of Marriage in October of 2016. A native of Fresno, Presbytera Maria has called always called Saint George her home and had the blessing to be both baptized and married in this church by Fr. Jim. Fr. Christian is ever thankful for the love and support she continues to provide him. Presbytera Maria serves alongside Fr. Christian in many of the ministries at St. George, where together they make a great team. Whether it be chanting for Divine Services or assisting with a youth event, Maria offers her talents. In addition to their work in their parish, both serve at the Metropolis of San Francisco Summer Camp, Fr. Christian as the Program Director and Maria as Arts and Crafts Director. In all of these ministries, Fr. Christian is immensely grateful for the opportunity to work alongside his loving wife.

By the Grace of God, in September of 2019, Fr. Christian was ordained to the Holy Diaconate by His Eminence Metropolitan Gerasimos and again to the Holy Priesthood shortly thereafter. Fr. Christian is very thankful for this opportunity continue serving the community of St. George in Fresno as the assistant priest and if it is blessed, looks forward to doing so for years to come!